Demotivational Poster of the Day 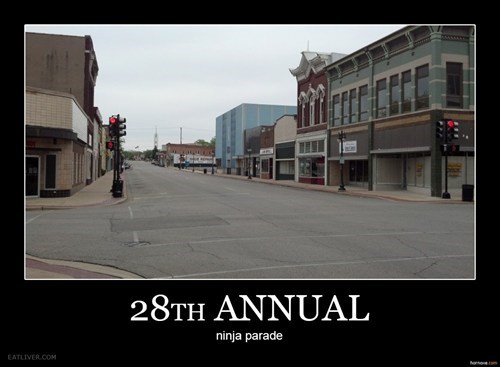 Enjoy Southern California's fabled good life - endless beaches, beautiful people - at the stylish Malibu Beach Inn. The oceanfront 47-room property has a studiously laid-back vibe, with gorgeous Pacific Coast views from nearly every window, stocked in-room wine coolers, and terraces or fireplaces. After a walk or two on the inn's private beach, you won't blink an eye when running into a famous celebrity - it's practically a daily reality along Malibu's 27 miles of sparkling coastline.

One day I will go to you and that day will be glorious. Wait for me.
Posted by Fnord at 1:00 PM 1 comment:

So, I've been looking at my blog, that basically consists of a ton of movie reviews, mixed in with random geeky stuff and random Chicago stuff. It's time to branch out a little bit. I'm gonna start posting ALL SORTS of things, including vacation hot spots! How exciting!

Urged by a sexy red-head to watch this movie again, I did so. And like the last time I saw it, I enjoyed it. A remake of a classic that became a classic itself. Fun movie. 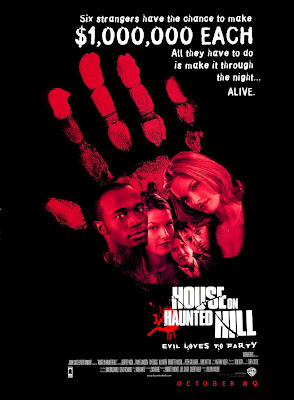 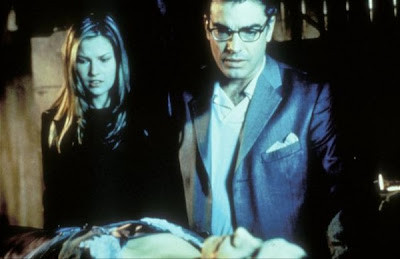 A surprisingly multilayered plot/whodunit and a creepy atmosphere more than make up for an ending that wasn't quite up to par. You can tell the director is really passionate about the horror genre. Quite possibly the creepiest haunted house sets I've ever seen. 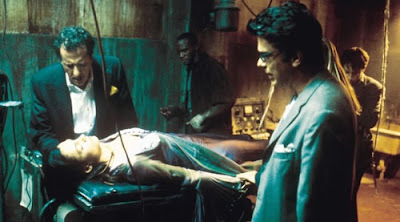 Some disagree but for a formula-genre movie, I have found this one to be quite original, spooky and welcome for repeat viewings. It really holds my interest and makes me sit on the edge of my seat! By definition, a movie like this has to have cheesy and inexplicable plot twists (esp. the classic “let’s split up and wander about aimlessly until we get killed off one by one”) but I just really like the actors (esp. Geoff Rush) and the premise. (By the way, I gave 5 stars to the remake of 13 Ghosts.) The acting here isn’t inspired but it has its moments — and sufficient plot twists. Some think a CGI ghost is a copout but why should this movie be expected to follow different rules than every other (horror as well as sci-fi)?

One of my favorite books growing up. I thought I had watched this movie in school at some time and I was right. I continued to watch it anyway. :) 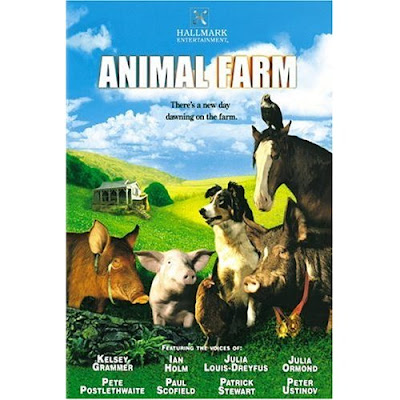 Only somewhat faithful to George Orwell's allegorical novel, this made-for-TV adaptation uses real animals as well as Jim Henson's puppets to tell the story of a band of farm animals who stage a revolt against their human owner (Pete Postlethwaite) in a bid for freedom. Several notable names provide the voices of the animals, including Kelsey Grammer as Snowball, Patrick Stewart as Napoleon and Julia Louis-Dreyfus as Mollie. 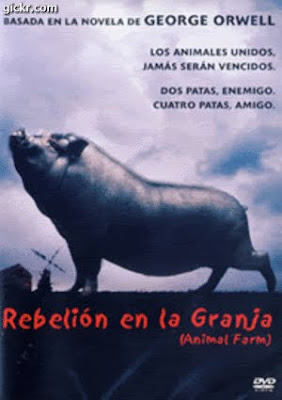 Can "biting satire of totalitarianism" ever coexist in the same sentence as "brought to you by Hallmark?" Yes, if you aren't a purist. Orwell's story is retold through the eyes (and voice) of Jessie the dog. This strategy adds pathos and "humanity" to a rather unemotional and impersonal novella. The downside is that it also adds sentimentality and unnecessary narration (just in case you don't get the point). Thus, the "Hallmark" effect. Orwell's anti-climactic conclusion was also modified to create a Hallmark moment of optimism. Heresy to some, this actually makes sense to have a modern adaptation depict the fall of communism. The core of the story and its satire remain intact. The additional jibe at television as the new opiate of the masses works well, as does its use of mock Socialist Realism styled propaganda film. Thus, the film successfully adapts a 55 year old story that was never meant to be put to the screen in the first place. 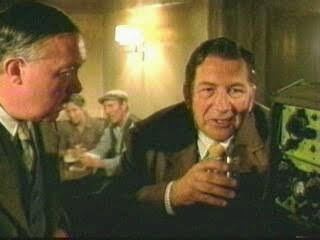 Not a bad production (and many bits are actually quite good) *except* for the modified "happy ending". That brought this down to three stars from four stars for me.

I've seen this movie before, but I watched it again. It's a classic in my book and watching it over and over again NEVER gets old! 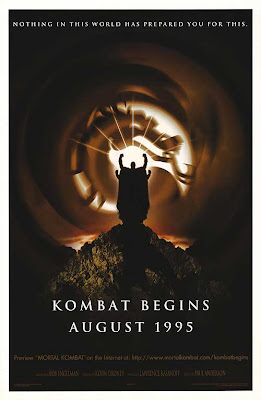 If the minions of the powerful Emperor Shang Tsung (Cary-Hiroyuki Tagawa) win another victory in the brutal Mortal Kombat tournament, Earth will fall to the forces of evil. That's why now, it's up to Liu Kang (Robin Shou), Johnny Cage (Linden Ashby), Sonya Blade (Bridgette Wilson) and Lord Rayden (Christopher Lambert ) to stop the emperor and save the planet. This action-packed flick takes its premise from the popular Mortal Kombat video game. 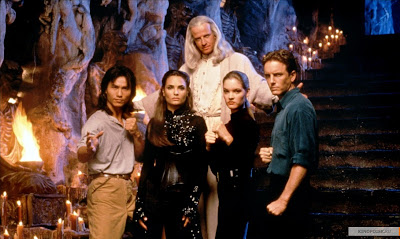 What a great surprise movie! As most of you know MKII was a disaster. But the original was a cult classic. The music, Sub-Zero, everything! Even if the movie wasn't a video game, it would still be a great movie by itself. Sigh, MKII could of been great... 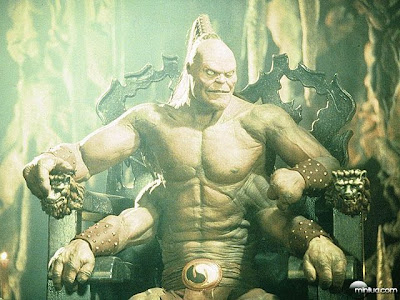 I saw this in 95 when it first came out. It was a fun movie then and has held up pretty well. Don't expect anything great by today's measure, the graphics and sets seem simple by today's standard. However the action is good, martial arts great and the acting is okay. What more could you ask for? 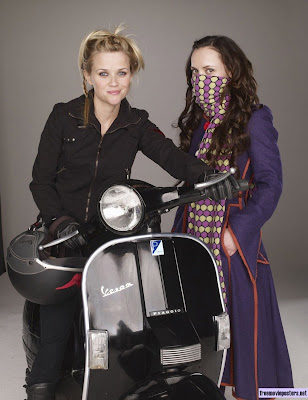 Forlorn heiress Penelope Wilhern (Christina Ricci) is cursed, and the only way out is to fall in love with someone of suitable stock. But how can she find her soul mate when she's sequestered inside her family's estate with only her parents (Catherine O'Hara and Richard E. Grant) to keep her company? Oscar winner Reese Witherspoon co-produced this untraditional fairy tale about a girl who bucks convention to create her own happy ending. 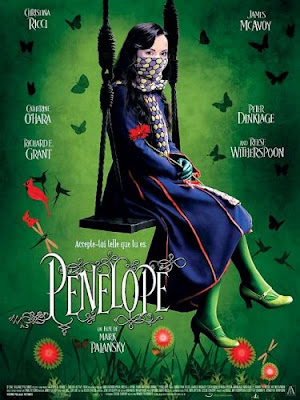 Penelope is a cute little fairy tale. It is a nice movie with a nice moral. Christina Ricci plays the lead quite well - against her normal role type. She is will known for being edgey and raw - this is sedate and fun, pig nose and ears included. Given the sweetness of the movie it lends toward being very forgettable. It's the type of film you will enjoy watching but remember nothing of it a week later. Still, it is good for children and interesting to see. Definitely recommended. 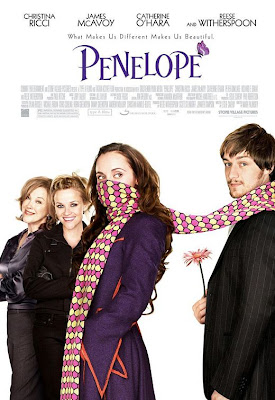 A moderately funny film that starts out fairly strong and continues to lose steam as it goes. I liked all of the people involved, but this probably needed a rewrite or two to add a little tension to the film. It was fun to see Nick Frost turn up. They should have given him a little more to do. McAvoy is decent here and Ricci is cute in the title role. It's not hard to pull for her. Some of the supporting cast were typically likable such as O'Hara and Dinklage, but that's not enough for a movie to be successful. It is as another reviewer said, somewhat forgettable in the end. Penelope had a great look to it with a great cast thats mostly wasted. Its somewhat watchable, though taken as the lightest of contemporary fairy tale comedies.

Cloudy with a Chance of Meatballs (2009) 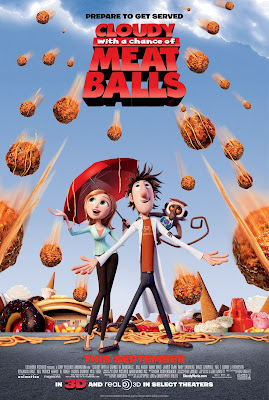 Inventor Flint Lockwood creates a machine that makes clouds rain food, enabling the down-and-out citizens of Chewandswallow to feed themselves. But when the falling food reaches gargantuan proportions, Flint must scramble to avert disaster. Can he regain control of the machine and put an end to the wild weather before the town is destroyed? Bill Hader and Anna Faris lend their vocal talents to this Golden Globe-nominated animated adventure. 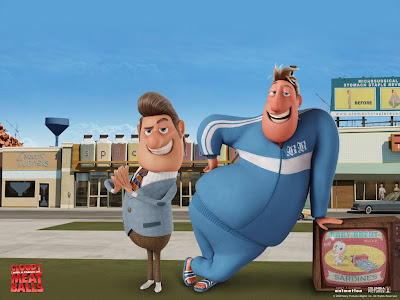 Another animated asset to the class of 2009 about a too idealistic inventor who invents a machine that turns water vapor from clouds into food. And loses control of it. Lots of fun for the whole family with no, repeat, no scatological humor. You'll find a love interest, respect between fathers and sons, family appreciation. And even the not so bad guys get a chance at redemption. A feelgood movie the whole family can watch and enjoy and share. Ouch, that sounds like a commercial review, but in this case, the shoe fits, sprayed on or otherwise! 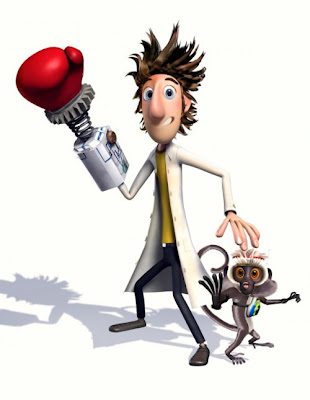 A bit qwerky of course but very funny. I laughed out loud at-least 10 times. Great for kids and adults! 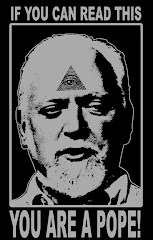 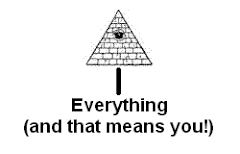 Joke of the Day

Q: What is the tallest building in the entire world?
A: The library, because it has so many stories.

Quote of the Day

We must be willing to let go of the life we have planned, so as to have the life that is waiting for us.
E. M. Forster

Theatrical/TV Quote of the Day

“You have to learn how to read cards.” 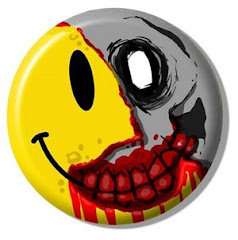 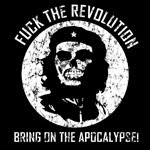 Fnord
I'm random. That's all you get to know for now.